Hello from the Roaring Water Bay. You’ll be pleased to know the wind has dropped somewhat and my life has settled into an almost relaxed routine.

As soon as I open the door to let the fresh Atlantic breeze in, early in the morning, I’m met by my personal trainer for the first round of morning exercise…

That’s Kit, who still hasn’t learned to put both his ears up, even after eighteen months of trying.

And then the usual routine of waltzing between towers of boxes looking for the all-important computer cable or the specific Playstation game, or the right screws for the right set of cupboards can begin.

Today, for example, it took the two grown-ups of this household about half hour to split a pile of wood into two identical stacks that would build two identical bookcases. See my thinking here? Bookcases = books out of boxes and onto shelves, which would make the house look instantly tidier. Anything that would make the house look tidier is a good thing by this stage, trust me!

Another twenty minutes were squandered on finding the bag of screws. Yes, we bagged them, in a vain attempt to keep things easy to sort out. Ha! At least we finally found the glasses and the cake tins…

It took another hour to figure out where all the pieces went (the bookcases are pine, and the wood is solid and fits together very snugly), and then… and then the fun started. Eventually, we had screws in each and every spare hole.

Only one problem: there were no screws left for the second bookcase. Only wood.

At this point we stood in the middle of the room, kicked over the mountain of curtains in frustration, and called for reinforcements. Our daughter pulled her nose out of computer games for long enough to skip down the stairs and straight to the right bags of screws. It didn’t take her two minutes!

Then she held out the bag we’d just emptied to show us its label: Computer Table. Ah. We hadn’t read the label. Explains why we’d run out of screws after the first bookcase.

So, fifteen minutes to take out the wrong screws, ten minutes to put the right ones in, and another twenty to assemble the second bookcase, plus another ten for scr… I’m not writing it; take your mind out of the gutter! 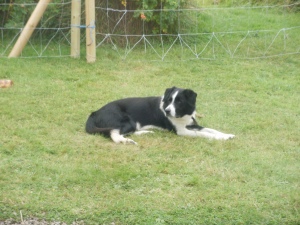 Ta-da! In just over three hours we had two bookcases assembled, a teenager who now uses every opportunity to poke fun at her parents and a bad case of fed-up-ness.
Tail between our legs, we decided to go outside and attempt to piece together the remaining shreds of our dignity in the company of our two dogs.

The view is still beautiful. It wasn’t sunny, but it wasn’t rainy either. And the dogs adored us as long as we kept throwing balls or Frisbees. It’s a miracle our arms are still attached at the shoulder. Tired, we slunk inside for a brew and a sit down. 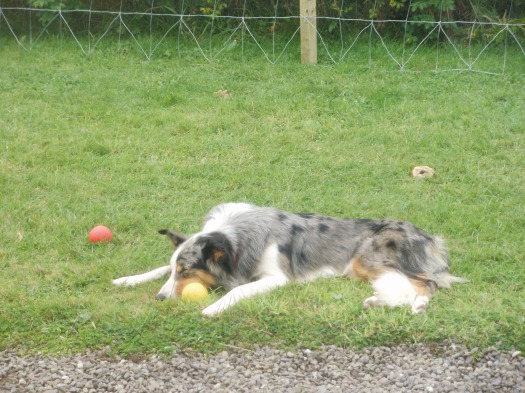 On an unrelated, but somewhat upsetting topic, I now ceased to admire two people I used to think the world of. They’re off my pedestal because, whilst I do agree with and even encourage aggressive marketing tactics by indies (if the big boys do it, why shouldn’t an individual?), I hate seeing people cheat. Use all you have to get yourself known, but you’d be shooting yourself in the foot if you deceive. No one likes a con artist. Believe me, these people’s books have just come off my TBR list.

Otherwise, editing is good. I’ve even managed to read a couple of books for reviews, and I’m writing articles for a few sites. Not exactly writing a book, but writing nonetheless. Slowly but surely, I’m settling. I still feel this is a good place for me.

What about you? Are you in the ideal writing place? Do you dream of one? What would it be like? Share. I’d love to know. As for buying reviews, what is your opinion? Is it worth it, in your view? Is it a good use of time and money?

5 Replies to “Tales from the Roaring Water Bay #2”

How To Build A Novel